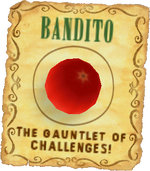 Bandito is a game mode unique to Fruit Ninja: Puss in Boots.

Bandito is a collection of minigames divided into three different areas: San Riccardo, The Cat Cantina, and Sky Castle. These three acts need to be completed before the final act, the Finale. Even though the minigames are all similar in each level, they are harder depending on which level you are at. The Finale is the easiest level, because all you have to do is slash at a pinata until the time runs out.

Players have to complete four challenges under a time limit (one of which is a special challenge). If the player hits a bomb or does not complete the challenge before time runs out, a life is lost. Even if the player has completed the challenge, if a bomb is hit, the life is still lost. Once all three lives are lost, it is "game over."

Only the first two acts are accessible to players of the demo version. In addition, the highest score the player can achieve is 1999 points.

There are three factors that are governed in this game:

The following stash is only unlockable in Bandito.

Retrieved from "https://fruitninja.fandom.com/wiki/Bandito?oldid=10277"
Community content is available under CC-BY-SA unless otherwise noted.