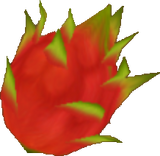 The legendary Dragon Fruit is a Fruit that appears rarely in Classic Mode. Because of this, it has no true pattern that has yet been discovered and appears at random times. When you slice it, you gain 50 points and the words "Ultra Rare" appears. (picture below). (As of version 2.0.0 with the use of King Dragon Blade, it says "Dragon")

There is an achievement for slicing the Dragon Fruit and the King Dragon Blade is unlocked for slicing it. (Removed as of version 2.0.0,)

It does not appear in Zen Mode or Fruit Ninja Frenzy.