View source
watch 01:40
The Sandman Will Keep You Awake - The Loop
Do you like this video?
Play Sound

Event Mode is a playable mode in Fruit Ninja. Before the 10th anniversary update, the player could play an arcade-style match through any of the available characters: Truffles, Nobu, Mari, Han, Katsuro, or Rinjin. Each match cost golden apples to play except for Truffles. After Truffles, each character's cost increased by 5.

Event mode plays similar to the events in Fruit Ninja 2. Rather than costing a certain amount of currency to play, rounds are free.

The track that plays here is called Ready, Set, Slice!

During the match, the player has to slice the fruit in order to fill up a bar that would grant them tokens with each fill. The opposing character can grant the player a good or bad power either through crates or random chance. The screen would be outlined in either green or purple respectively.

At times fruit would be thrown out in random patterns. These patterns consisted of fruit thrown diagonally from any corner, a wave of five shaped like an arrow, a ring of 12 with one in the center, or five vertical fruit in two columns.

The default track that played is called Gutsu & Truffles on the Road.

The King Dragon event consists of four stages. Each has a special end reward obtained after the player has gained a certain amount of points. Similar to the juggle minigame, the player must juggle golden dragonfruit until they can use a berry blast to break them. After each round the player will earn a certain amount of juice points based on their score. This juice adds up to a total with rewards obtainable after reaching a certain amount.

After stage 3, the end rewards consist of medals. Each medal requires 5,600 juice to receive.

Similar to the King Dragon Event, but with the arcade game mode instead.

Plays like Classic mode, adding juice to a meter at the end of rounds.


The summer splash event is a leaderboard type event where players compete for the top ranks. All players will receive the water blade and great wave dojo, but only the top three will receive above 10 duplicates and a truffles profile icon.

The gameplay for the event is identical to the King Dragon Event, the only difference being trophy rewards rather than juice. The event will last from July 17th - July 26th.

After its introduction, Event Mode had several holiday events that ran for limited amounts of time. These consisted of Halloween, Christmas, Valentine's day, and St. Patrick's day. Each holiday introduced new blades and dojos that could be bought from the event store. During the events, several of the characters would even dress in different costumes.

The track that played during the Halloween event is called Fruit-O-Ween. 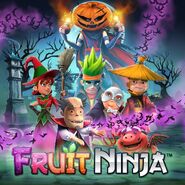