View source
watch 01:40
The Sandman Will Keep You Awake - The Loop
Do you like this video?
Play Sound

Ep.4: Grease is the Word

Terry Klassen
Mark Samurai is a character from Fruit Ninja: Frenzy Force. He serves as an antagonist alongside Durian Grey. His main weapon is a blade, though his main method of attacking is with ranged projectiles (shurikens, grease splatters). While he aims to become a samurai like the deep fried samurai, he doesn't have the skills for the job.

Mark has short hair and light green eyes. He is mostly seen in his samurai appearance. He wears a black samurai helmet with a red stripe going through it. His clothes are mostly dark red with yellow and black mixed in. He wears a belt with a burger at the center and studded shoulder pads. Mark also wears shorts with tapered legs. Rather than sandals, he wears shoes.

Mark Samurai is a loud and somewhat obnoxious character. He usually acts in a selfish and bratty manner. However, he does have a few positive interactions with others in the series. Until the last episode, he has neither the brains nor the brawn to fight the frenzy force with. Instead, he relies on the chumplings and Durian to do most of the actual fighting. His attempts at improving his skill usually come up short. Despite this, he tries as hard as he can to find a way to defeat the frenzy force.

Mark Samurai has a total of 6 appearances in the show, second to Durian Grey. The episodes he appears in are: 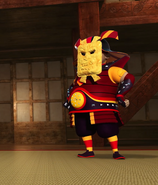