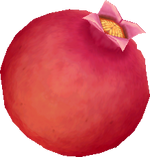 The Pomegranate is a Fruit that appears when landing on a score in Classic Mode and at the end of Arcade Mode. When hit, the player can hit it as many times as they can in the time given, before the Pomegranate will explode in a fruity mess, destroying everything on the screen and giving points for the number of slashes you did (e.g. 35 slashes; 35 points) and how much fruit you destroyed with it.

Retrieved from "https://fruitninja.fandom.com/wiki/Pomegranate?oldid=13765"
Community content is available under CC-BY-SA unless otherwise noted.