Male
Sensei is an elder character in the Fruit Ninja franchise and a trusted advisor to the player. In Fruit Ninja and Fruit Ninja Classic he gives fruit facts and gaming tips. Any time there was a new event, Sensei was usually the one to introduce it. In Fruit Ninja 2, he introduces the player to the game. The player can also challenge Sensei in training mode. He is a Legendary character.

Sensei is a short old man with grey hair and wrinkles. He commonly wears a blue and white robe with black pants and brown sandals. On his head he wears a black head band. In Fruit Ninja's Event mode, he dresses in accordance to whichever holiday event is happening.

In Fruit Ninja: Frenzy Force he is seen wearing a variety of costumes, often being terrible disguises.

Sensei is an old and wise character. He often has a generally calm and friendly attitude, though less so when displeased. The only moments he has ever been visibly unhappy is in the fruit ninja origins shorts: Ninja's in Training! and Katsuro's Training Day.

In Fruit Ninja: Frenzy Force, he is more on the goofy side with his costumes and appearances. With the exception of Applecart Upset, he offers advice versus directly interfering with any ongoing problems.

Introduces the player to game modes and mechanics. Gives fruit facts at the end of rounds.

Appears in the I Heart Sensei dojo and at the end of rounds.

Appears in each episode to give advice, often in various (terrible) disguises.

Introduces the player to the game and interacts with the other characters. 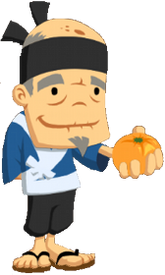 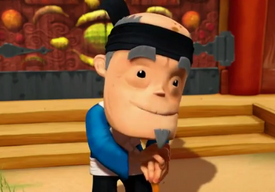 Sensei as seen in the trailer 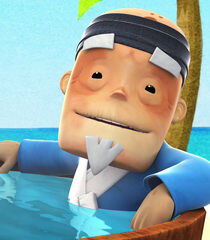 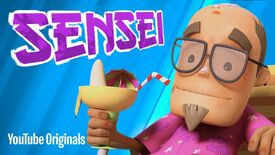